The Transaction analysis section provides you with a summary of the "health" of your transactions. You can see specific details for transactions that were out of the norm for FlexPay, meaning transactions where there are some improvements or optimizations that you can make to increase the rate of success of your declines. The Overview report gives you a full picture of all the transactions FlexPay received during your selected date period, and how many total improvements were identified.

The bottom section of the report offers you a breakdown of the data by week. You can get more specific details by clicking on any weekly period.

Note: You can export any of the reports or their respective transactions at any point from the Export option located below the date range menu. Please visit How to export Reports or Transactions from the Client Portal for more details.

Once you have selected an individual week to drill down, you'll see the three different improvements types that we are able to identify and how many transactions correspond to each one.

If you want to investigate a specific type, you can do so by going to each individual report from the left pane under Transactions analysis. 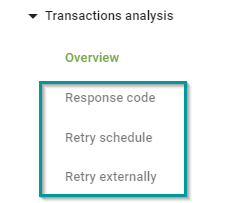 Note: The date range you have selected will remain active as you go back and forth between reports in the same section.

The report shows you a breakdown of the transactions by the response code we received and categorized them based on which step of the payment process it originated from. It can either be the Bank, the Gateway, the Payment Method, the Configuration, or the API. You can hover your cursor over any week to have a quick glance at the breakdown.

The report shows a categorization of your transactions based on whether they were on time and followed the Retry Date & Time as recommended by FlexPay, or they were received early or late.

Note: FlexPay's recommendations are in the UTC time zone. To see the current UTC time, you can go to https://time.is/UTC

The bottom section of the report shows a detailed view of the transactions defined scheduled broken down by week. You'll see if they were received on time, early, late, and the average days they were early/late. You can have a daily view by clicking on any weekly period.

The power of FlexPay's AI is exhibited when recommending a Retry Date & Time for your transaction, adhering to it is crucial for any integration point. If you see a lot of early or late transactions in this report, you can export the transactions to further investigate, or reach out to support@flexpay.io to get assistance.

The report shows how many transactions have been received and the average external retries, meaning transactions retried multiple times before being sent to FlexPay. Since FlexPay expects declines to be received after an initial failed rebill, a high number of transactions in this report may indicate a misconfiguration between the integration point and FlexPay.

The bottom section offers a weekly view of all received transactions, how many were retried externally, and the average external retries. You can see daily details by clicking on any weekly period.

Note: It is normal to see a high number of external retries when you first start sending traffic to FlexPay, since transactions may have already being retried in your previous recovery process. However, after a full billing cycle, you should not see external retries.